Thousands of attendees. Hundreds of mentors. Six years. One HackIllinois.

In the years leading up to HackIllinois’ inception, Facebook had been hosting their Midwest Regional Hackathon at the Siebel Center, UIUC’s home for its computer science department. A group of students had been helping the company plan the event, but as collegiate hackathons like HackMIT and MHacks were established, they became interested in making their own. After a lot of discussions and Facebook’s blessing (in the form of disbanding their annual event and sponsoring the new hackathon), HackIllinois was created. 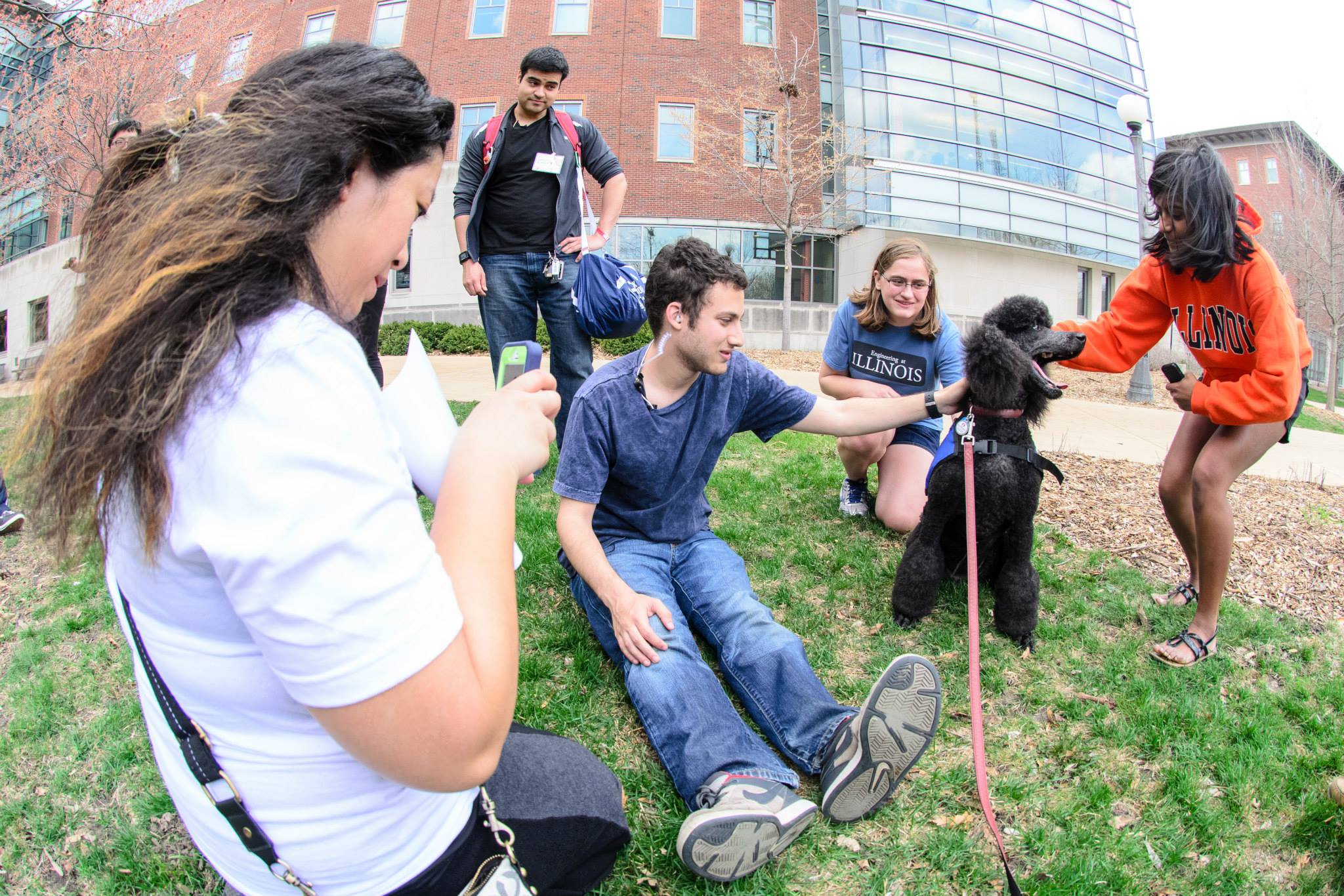 Equipped with their previous involvement in hackathon planning and organizing the student-run technology conference, Reflections | Projections, the 51-person staff organized an amazing and successful event for 740 attendees and 56 sponsors.

The outer spaced-themed 36-hour hackathon was packed with events, including a plethora of tech talks, lots of food, Space PuppiesTM, and the inaugural Nerf mini-event. 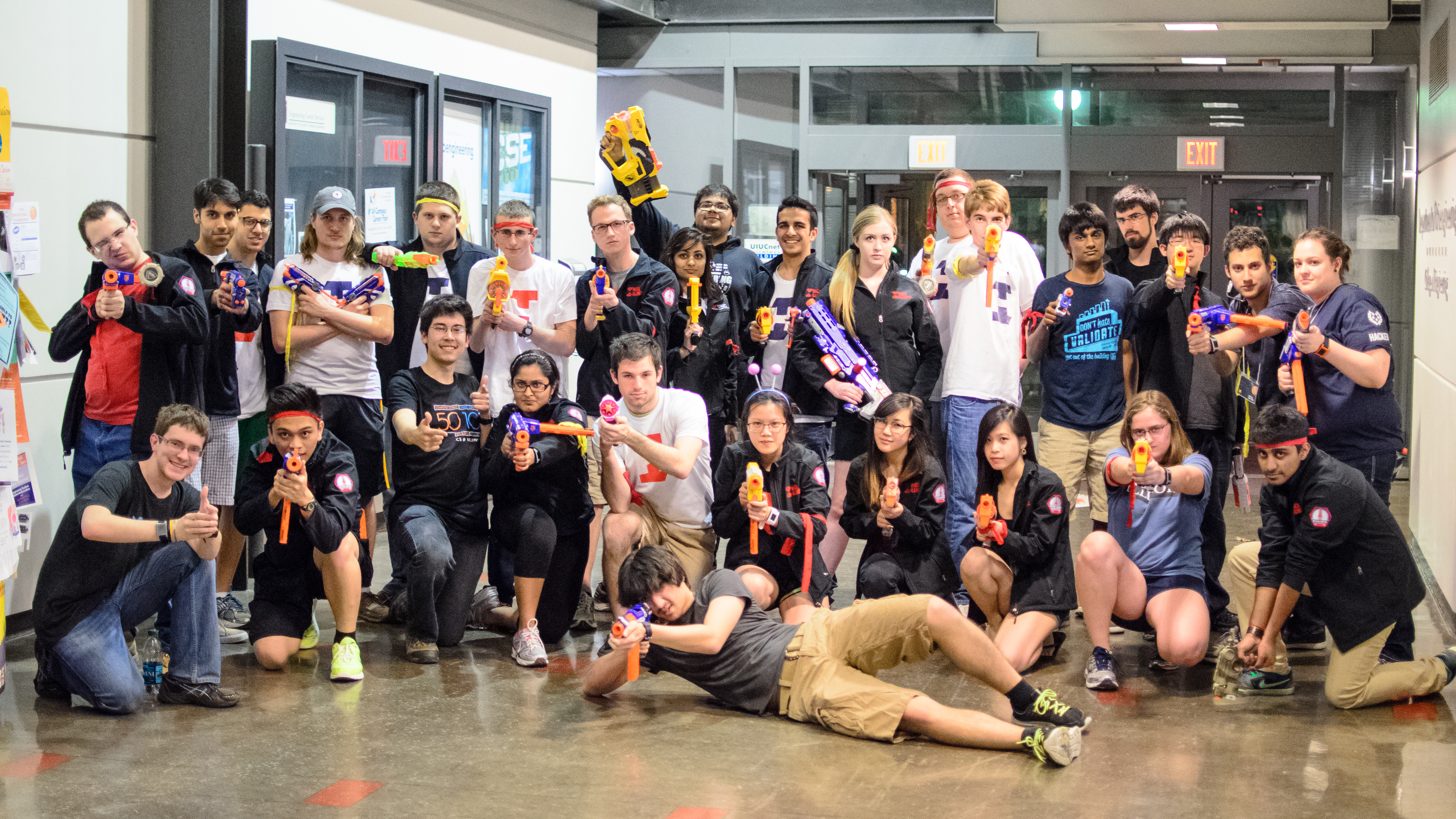 The staff would see their success and general event structure continue into 2015, when the event shifted from April to its now-traditional last weekend in February. The event also began the tradition of having annual themes centered around exploring a variety of frontiers. From 2014 to 2019, HackIllinois would explore the universe from the vast expanse of space to the depths of the ocean. 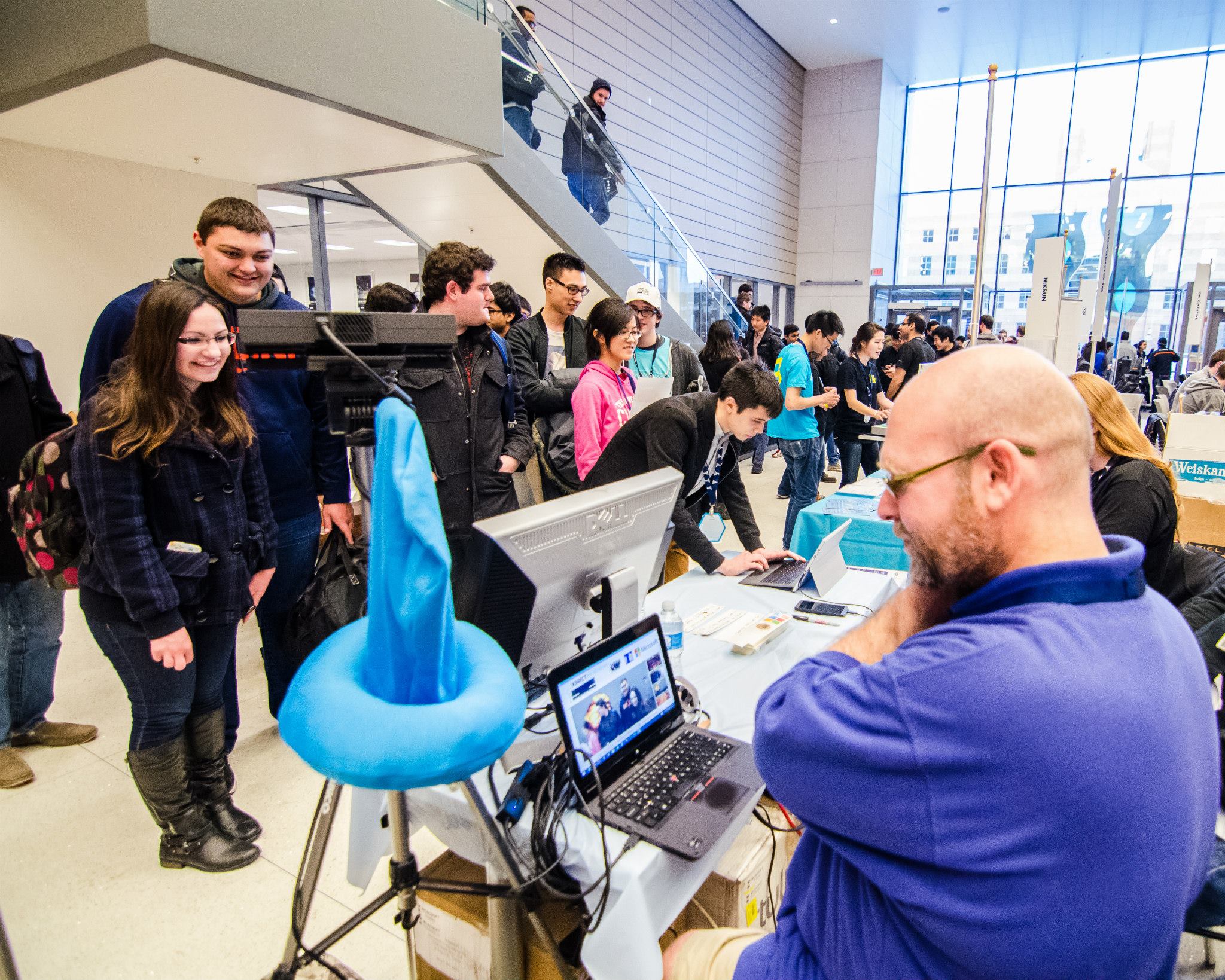 Along with the new association with the ECE department came an increased emphasis on hardware projects. The staff made hardware available to attendees. Submissions and prizes were split into hardware and software tracks. 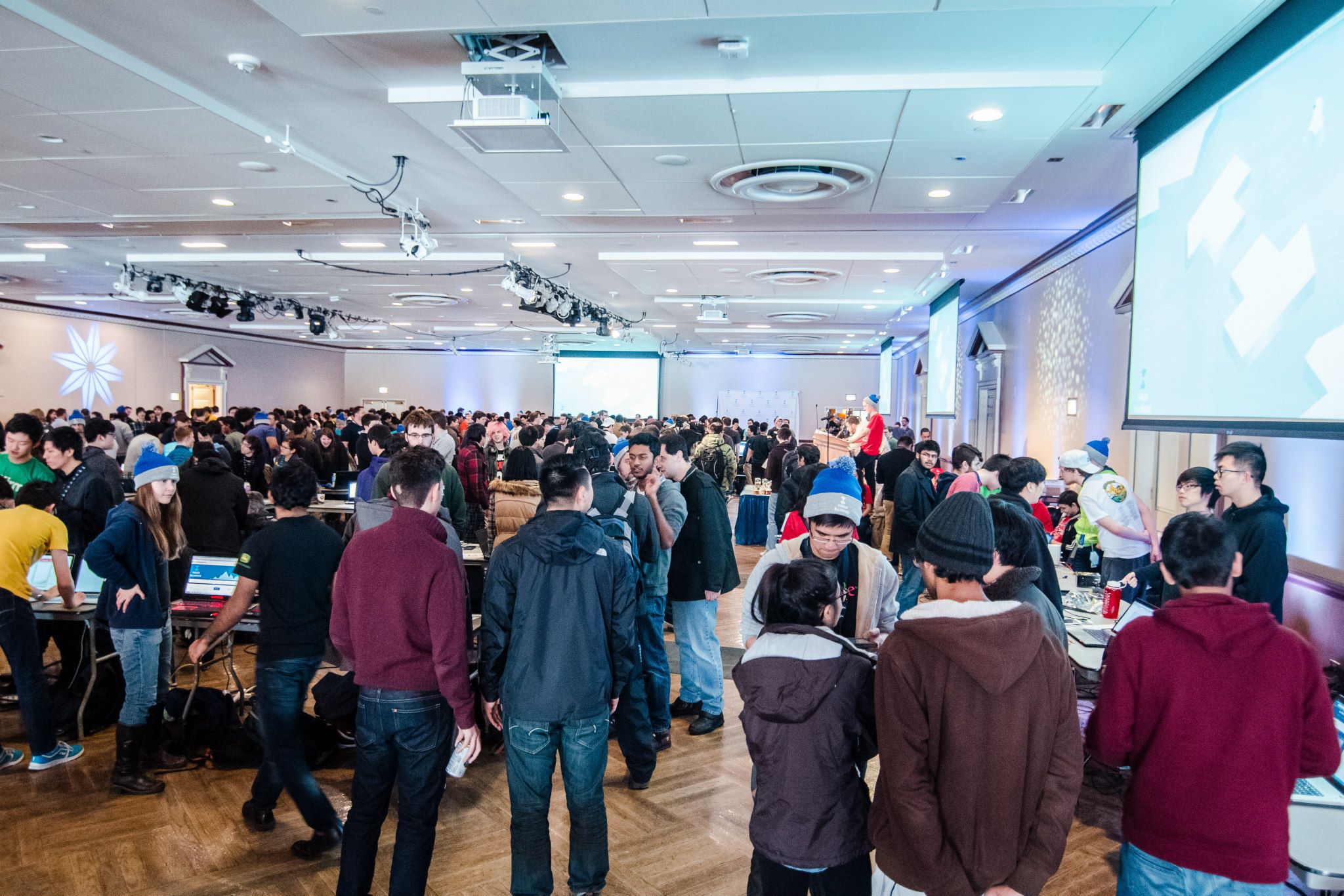 The staff also sought to make HackIllinois more visible in the public eye. To attract the attention of all students on campus, the project expo, opening, and closing ceremonies were moved to the Illini Union, the student hub of campus. The expo was made open to the public; attendees took the opportunity to explore submissions ranging from VR games to messaging apps.

In just two years, the scope of HackIllinois had expanded from a 700-person event in one building to a 900-person hackathon taking place across three buildings. From there, HackIllinois would only grow to become bigger and better.

By 2016, a successful event had already been run twice, and the team was looking to create something more. An open source track of the event was soon inaugurated, with the hopes of “building HackIllinois as an exciting, non-traditional experience for students.” 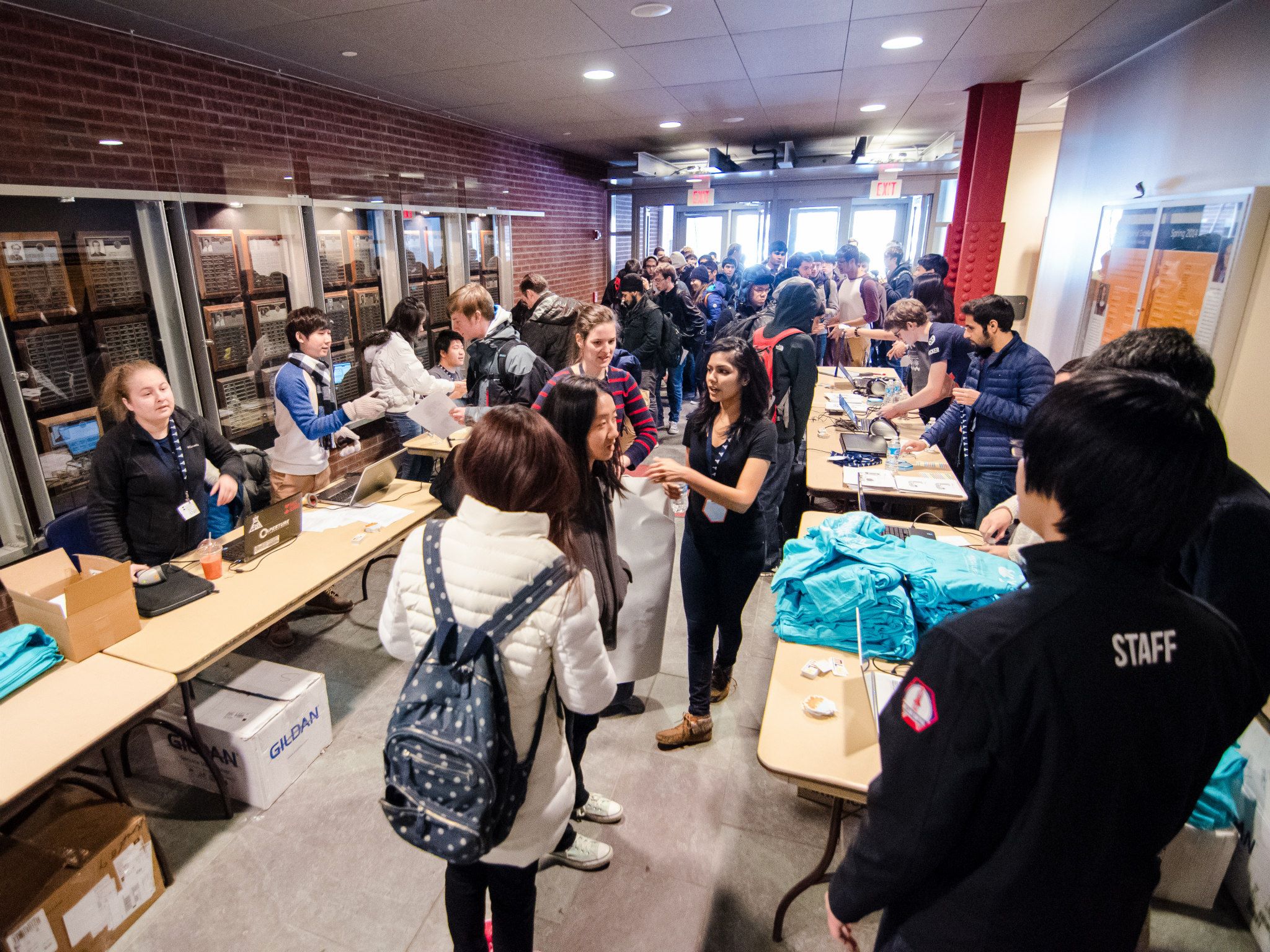 The transition was prompted by the staff noticing that the event was failing to provide the ideal experience they set out to create. Student feedback about food, mentorship, admittance, and judging showed that HackIllinois would have difficulty handling the volume of people that would be passing through the doors of Siebel and ECEB during one weekend.

The staff started to see a pattern in many of the submissions. Hackathon attendees had developed a formula for winning these events, resulting in projects that were simply variations of the same software and skills. The projects themselves would rarely be continued after the hackathon. The combination of the two led to a well-tested approach to winning with no continuation of the projects afterwards, signaling the eventual death of Hackathons. 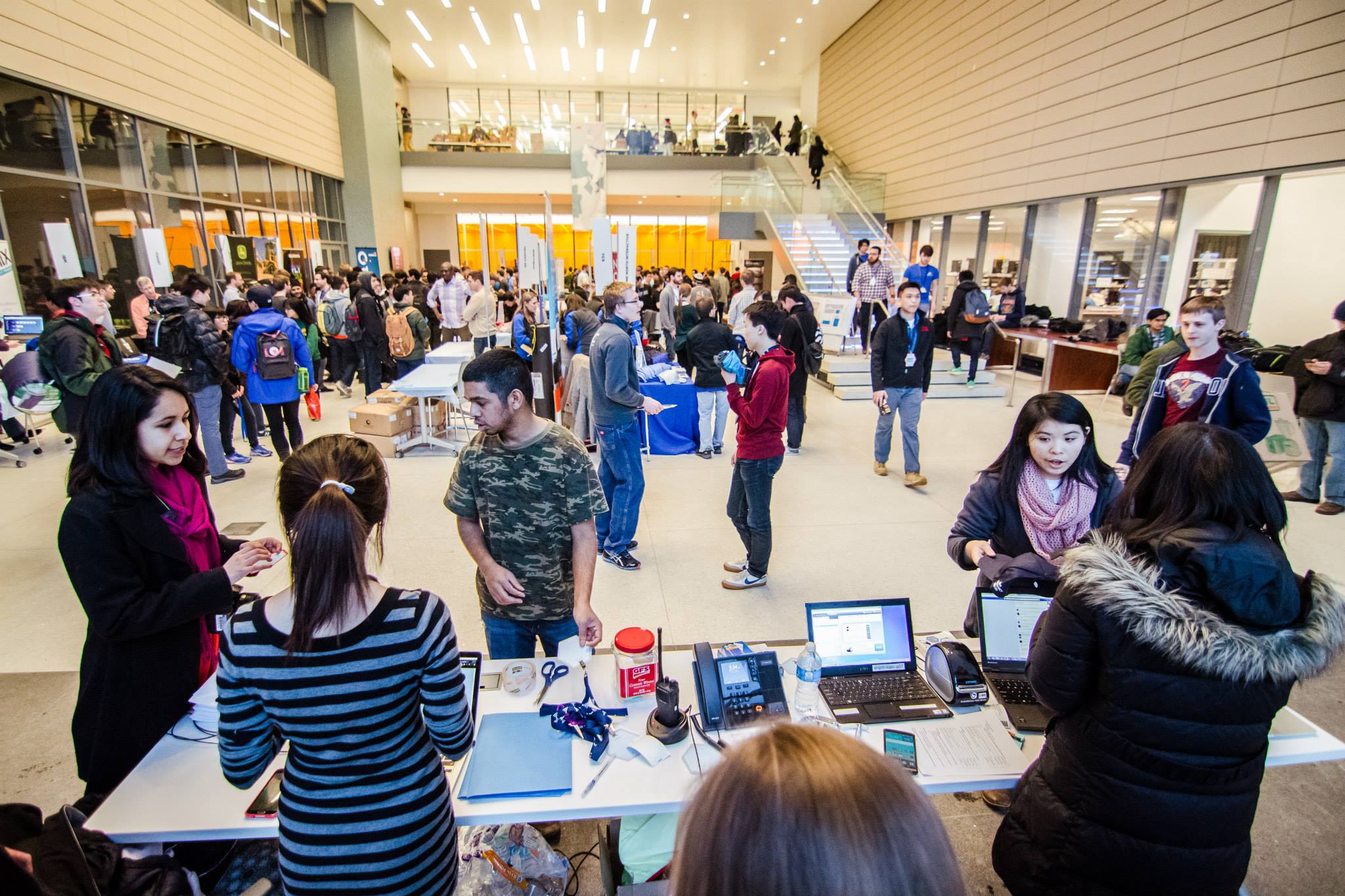 Open source would be the solution to these problems. It naturally attracts strong developers but also caters to those who are eager to learn the skills necessary to get involved. Projects inherently would be continued after the event, and the extensivity of both the available mentorship and the variety of projects ensured that everyone would learn something. The staff saw in open source their chance to recapture what hackathons were meant to be: fun, innovative, and awe-inspiring.

Having just put on one of the largest collegiate hackathons in 2016, part of the staff was invested in the traditional hackathon model. They had already hosted over 1,500 people successfully and many sought to further refine the success, whether that was increasing attendance to further scale up the hype or decreasing attendance to more heavily concentrate resources.

Another part of the staff sought a fully-open source hackathon – no prizes, much fewer attendees, and an ideal space where mentors and attendees could collaborate side-by-side to engineer features for open source projects. The new hackathon would cultivate contributions and creativity rather than competition.

Ultimately these two staunchly rivalrous opinions compromised on the “Create” and “Contribute” tracks of the event, each of which reflected the goals of both groups. Hackers were given the opportunity to form the foundations of a new open source project or contribute to a pre-existing one. HackIllinois then began its journey of revolutionizing the college hackathon while giving back to the open source community. 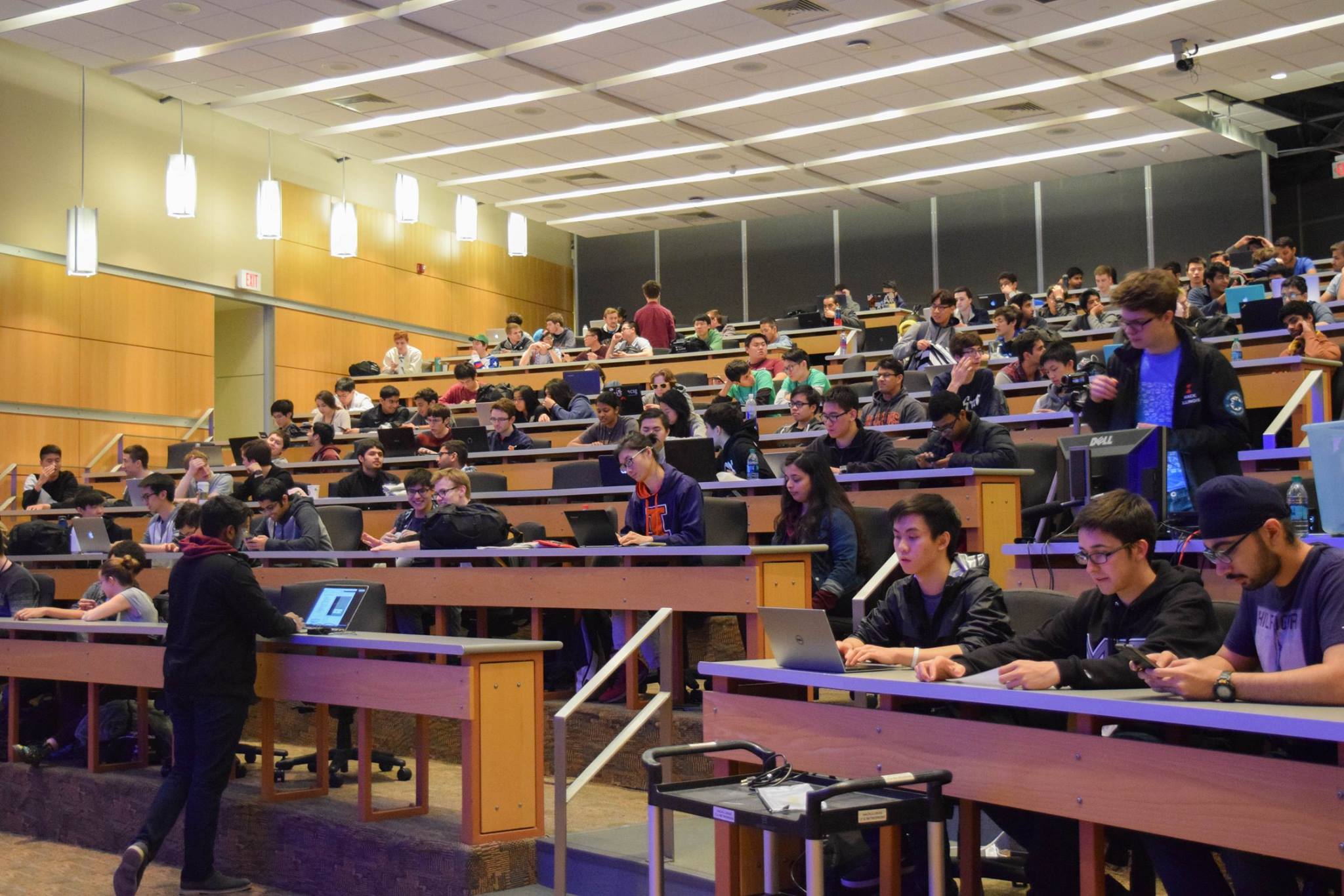 The road to a fully open source event was riddled with troubles. Alongside downsizing the team, the staff was also in the midst of a reorganization and roles were not always clearly defined. More importantly, the staff was cautious about fully marketing themselves as a completely open source event – what if there were no mentors, and thus no guides for attendees delving into the world of open source for the first time? After all, without an interesting and successful precedent, many were skeptical about the benefits of spending a weekend teaching college students how to code in the middle of the cornfields of Illinois.

The greatest problem the team faced was raising money. Companies liked the idea of hackathons where students could use their API and win prizes with them, so the staff had to convince them that an open source hackathon would lead to higher quality projects through which recruiters could watch engineers contribute to real projects. 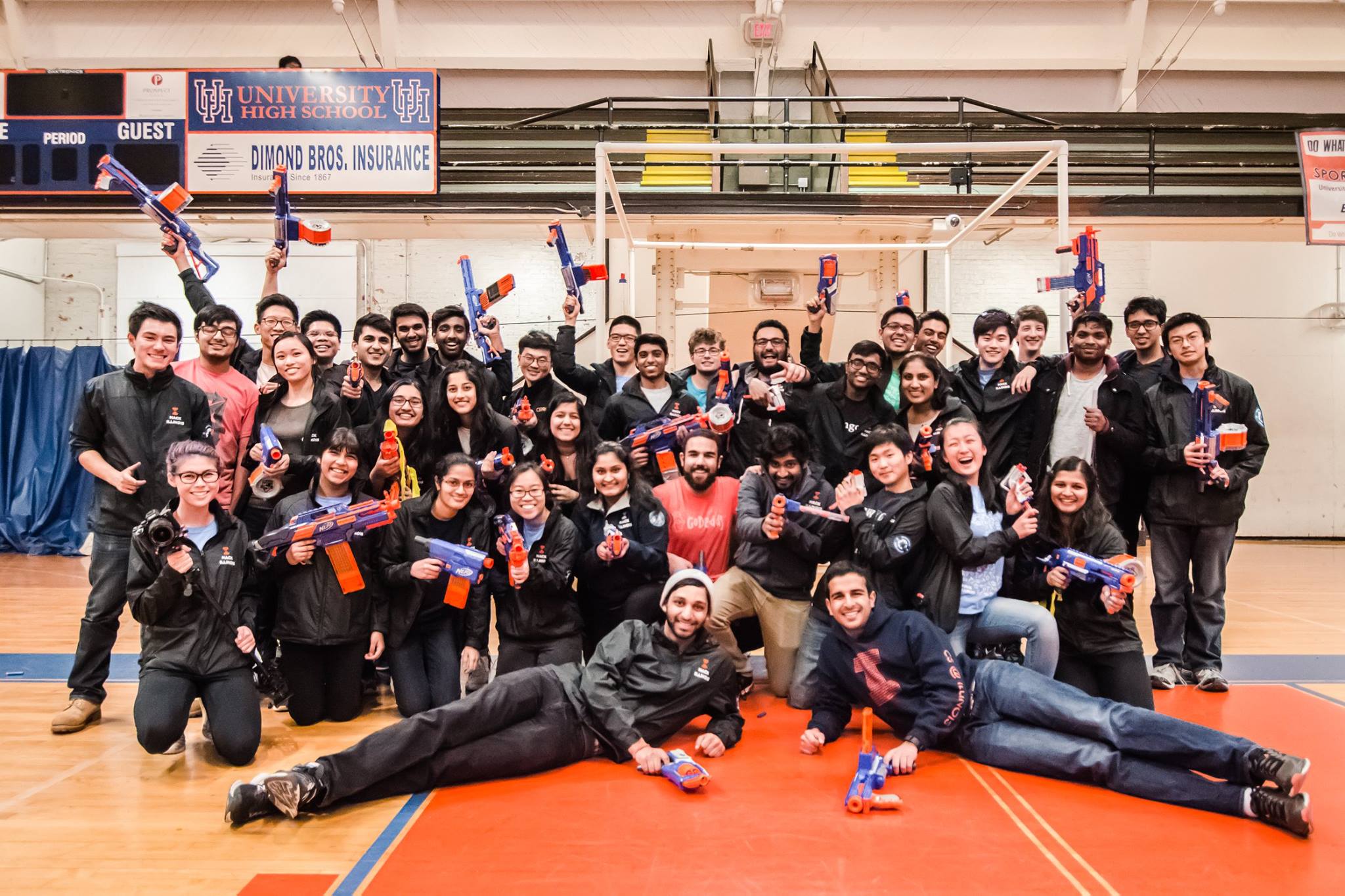 Although the team struggled with finding mentors and sponsors, HackIllinois 2017 was ultimately a success due to the detail-oriented, thoroughly-debated work of the staff. They weighed their own values with those of their fellow staff, sponsors, mentors, and attendees to create a successful open source hackathon.

While the team saw great success in 2017 through the create and contribute tracks, the general consensus from the attendees was that the separation of creating and contributing caused a rift that made it feel like two events. The 2018 team’s greatest challenge laid in capturing the essence of the Create and Contribute tracks, which appealed to traditional hackers and open source contributors respectively, while still forming one cohesive event. 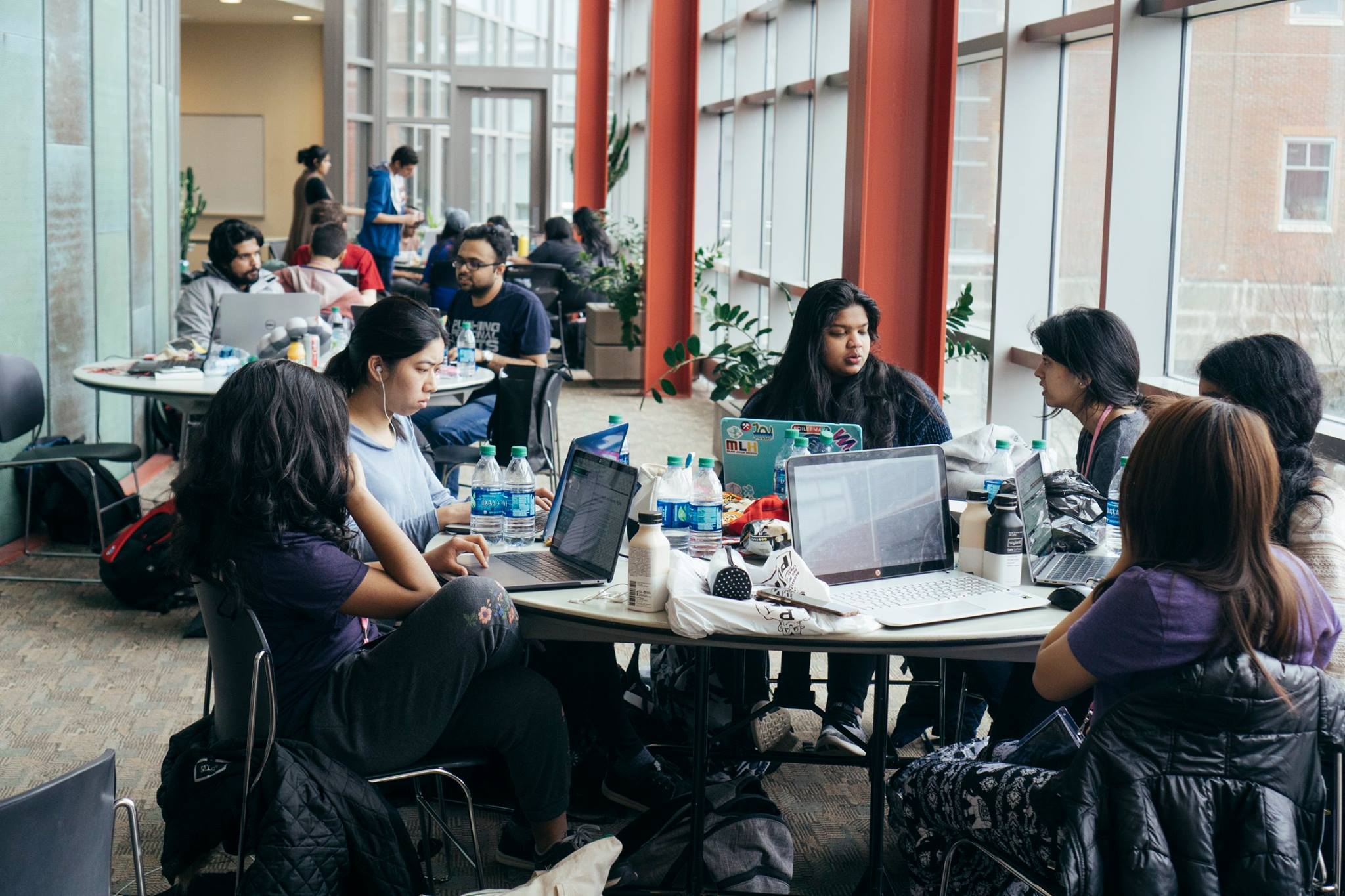 One such method was cultivating interactions with big-name open source projects, such as 2017 HackIllinois Prize winner Puppeteer to Istanbul. These “blockbuster projects” would excite and attract attendees while providing motivation to continue refining the event for the staff.

Since the transition to open source, attendees and mentors have contributed to projects such as jupyter, Rust, Julia, numpy, and npm. Attendees have made hundreds of PRs and forged invaluable connections to open source and industry developers. 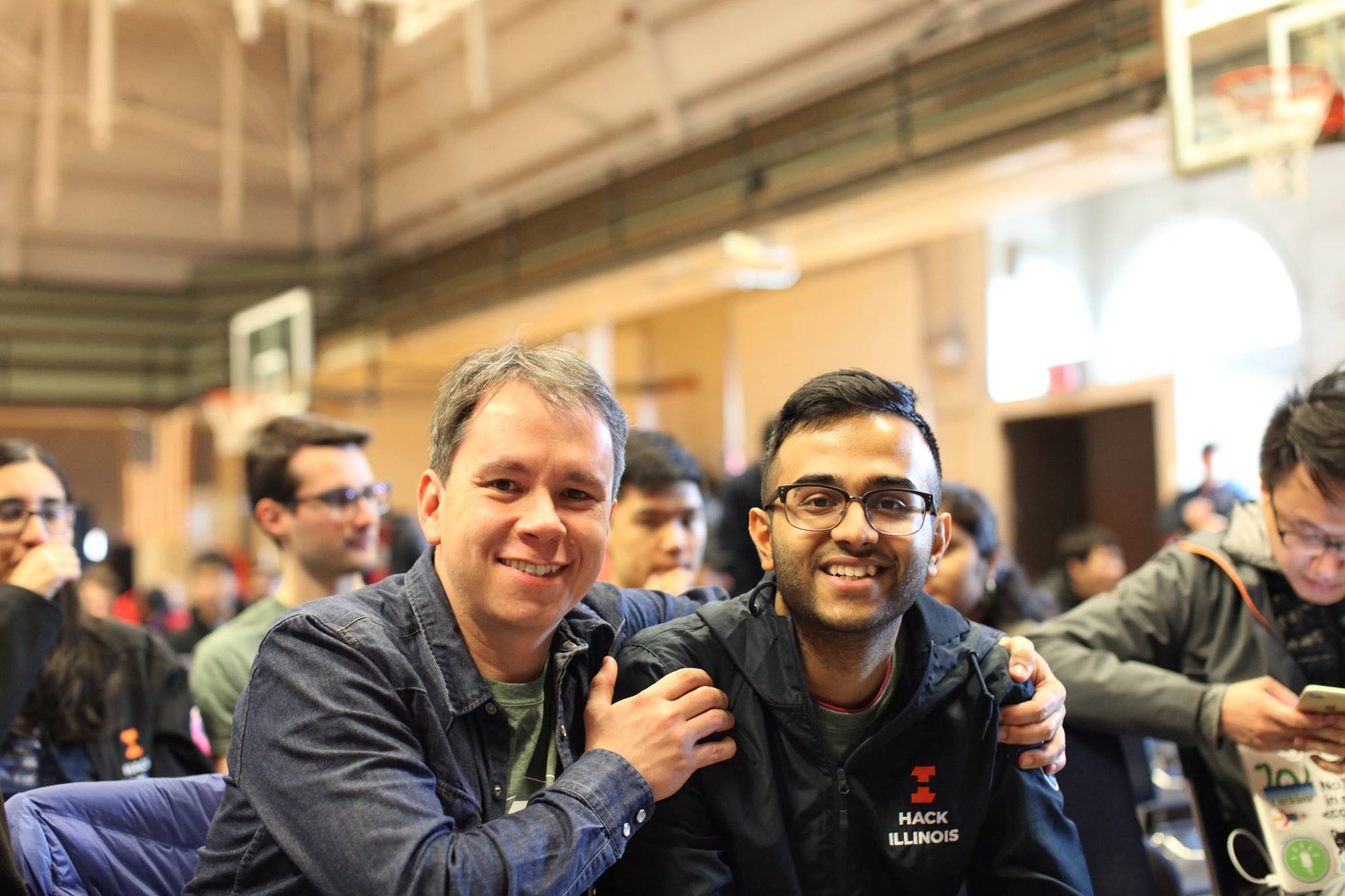 One example is the friendship between open source mentor Pablo Aguiar and staff member Shreyas Mohan. The staff reached out to him for the 2018 event, not knowing that he would be travelling to the midwest from abroad. Nonetheless, Pablo was incredibly excited about the event and travelled for days to make it. After the event, Shreyas and Pablo remained in touch, establishing a close staff-mentor friendship. Pablo returned to the event in 2019, again travelling for days from abroad to make it.

Throughout the combined 72 hours, Pablo has mentored many groups of students, from beginners in open source to experienced developers. Many from the 2018 event continued to work on their project, an example of the success of the open source hackathon model.

2019’s event marked a transition from separate tracks into one submission process. The team further refined the open source focus of the event by emphasizing the importance of welcoming beginners into the open source community. 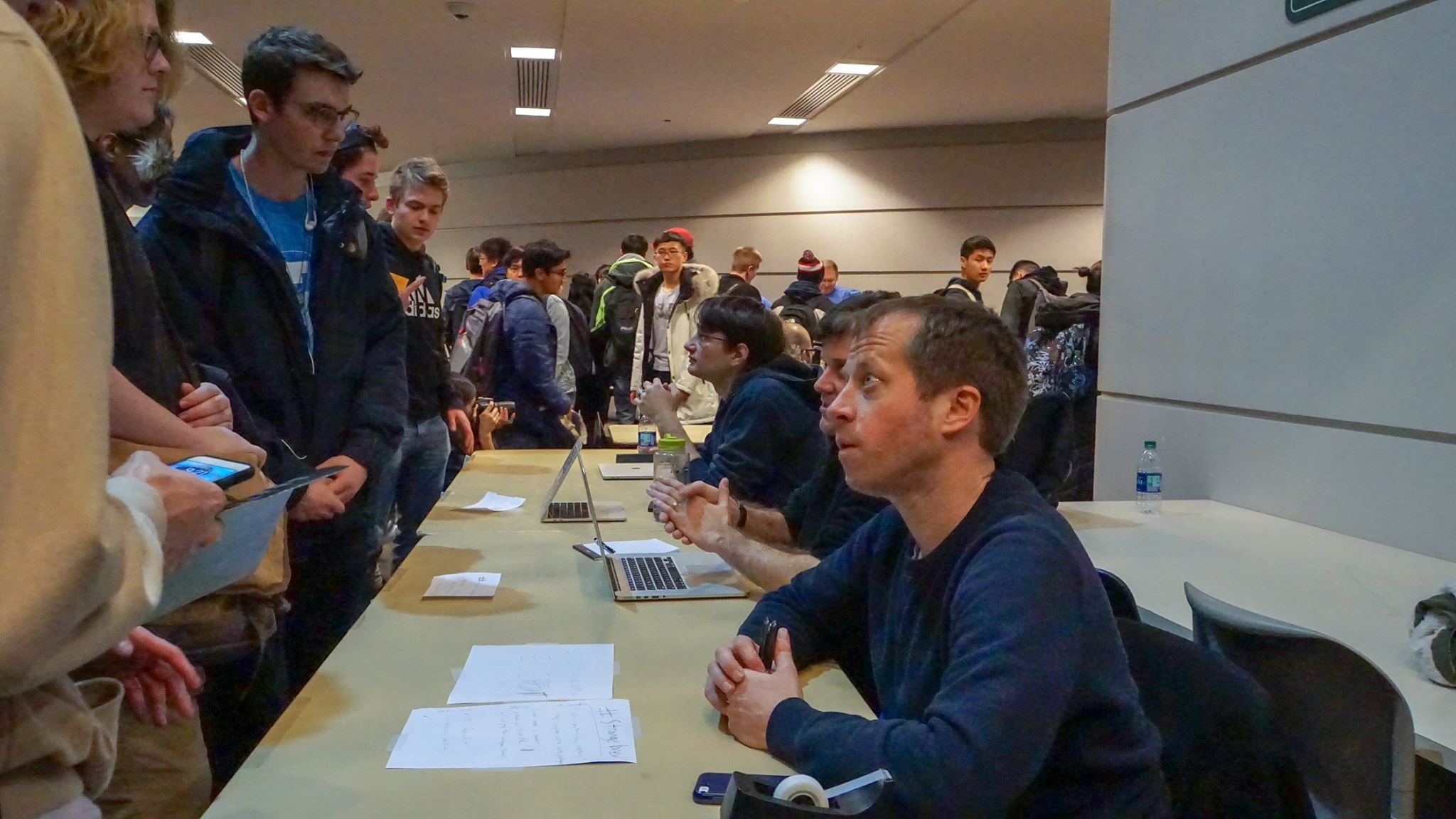 The beginner-friendly focus was driven by the desire for HackIllinois to be many people’s first exposure to open source. The staff sought to introduce as many people as possible to the ideas and the community that revolved around open source software. Beginners to open source would be the ideal target for the event.

Although the event welcomed just as many freshman as it did seniors, mentors and students could see the shift towards welcoming beginners to open source. While not everyone was able to walk out the door with a prize, many felt like they left with something more important: new knowledge they gained from the people they interacted with over the course of the weekend.

Explore. Connect. Build: What Lies Beyond?

For six years, HackIllinois has sought to bring the brightest young minds from across the country together and transform their ideas into reality. Year after year, the staff strives to provide everything a hacker needs for a weekend so they can focus on building something amazing. From the small details like hospitality to the overarching elements like our unique open source structure, the foundations on which we will build HackIllinois 2020 have been well-refined.

While time has passed, our commitment to promoting open source, creating a welcoming community to experts and beginners alike, and fostering a group of the most imaginative college students in the world has and will always remain the same.

Get ready to Explore. Connect. Build. at HackIllinois 2020.

Are you interested in planning HackIllinois 2020 with us? Come join our staff! Meet us at Quad Day, E-night, or ACM Open House, and be sure to attend our onboarding meetings in the fall.

Are you an open source contributor interested in fostering college students’ interest in your work? Shoot us an email at opensource@hackillinois.org to learn about how you can get involved!

Do you think your company would be interested in partnering with us? Reach out to our staff at sponsor@hackillinois.org to learn more about our sponsorship opportunities.

Do you want to attend HackIllinois? Applications will be released in the winter. Stay tuned to our website at hackillinois.org!